Our Resource Rooms are currently operating via curbside pick-up only. Please call us for more information or email martinpitt@mppfc.org.

At the Martin-Pitt Partnership for Children, our staff is consistently focused on the overall health and wellbeing of the children and families in our community. This February, we’re offering a new addition to our child-focused activities: The Kids’ Corner. This resource will offer a monthly list of fun and education activities that you can do at home with your little ones. Check out the interactive site here!

“The Story of Ruby Bridges” by Robert Coles 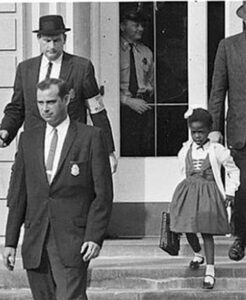 Ruby Bridges, age six, becomes the first African American to integrate an elementary school in the South in 1960.

February is one of the most historically important months of the year because it celebrates Black History Month. According to National Geographic for Kids, “In 1915, in response to the lack of information on the accomplishments of Black people available to the public, historian Carter G. Woodson co-founded the Association for the Study of Negro Life and History. In 1926, the group declared the second week of February as ‘Negro History Week’ to recognize the contributions of African Americans to U.S. history. Few people studied Black history and it wasn’t included in textbooks prior to the creation of Negro History Week.”

The Story of Ruby Bridges tells the story of a little girl who, in 1960 at six years old, became the first African American student in the South to integrate an elementary school. For this activity, sit down with your child and listen as The Teacher’s Library reads the story.

How to Make Edible Play Dough

When it comes to activities for kids, play dough is always fun to play with. In addition, it’s a fantastic way to engage your child’s sensory skills. If your child is still at the age where putting things in their mouth is their favorite thing to do, it’s always smart to have a quick and easy recipe for edible play dough. We love this recipe for edible play dough because it’s simple, safe to eat, and you can customize the colors. Remember, if you choose to add color, make sure to use food grade food coloring or dye.

Listen to “It’s Such a Good Feeling” by Mister Rogers

“It’s such a good feeling to know you’re alive. It’s such a happy feeling: You’re growing inside.” Fred Rogers changed the way we look at the inner lives of our children through his creation of Mister Rogers’ Neighborhood. Mr. Rogers created and starred in the television show’s 895 episodes. He wrote and performed more than 200 songs and created and puppeteering 14 characters. “It’s Such a Good Feeling” is one of Mr. Rogers’ songs, and we think it’s a great one to sing at home!

Elmo knows what he’s talking about. As you engage in activities for kids that build social emotional skills with your children, you learn that respect for everyone’s culture is key. Confronting our biases is necessary to avoid corrupting their learning environment. Sesame Street recently produced a town hall that was aimed at helping children and families discuss diversity, culture, and racism. Watch the Sesame Street Town Hall, and then complete the five-finger friendship craft to learn how to be a better friend.

If you’re a fan of rhyming and love, Snuggle Puppy by Sandra Boynton is for you. This book is a great choice to read on Valentine’s Day. Snuggle Puppy enforces the important affirmations that your child needs to hear to build their resilience.

Talking to your child about the different experiences everyone has in life is important to increasing their awareness and instilling compassion for others. Henry’s Freedom Box tells the true story of a little boy who grows up as a slave and his journey to find freedom.

A Bright Future for Every Child in Our Community